Going from 2 wheels to Three Part 2

From the very beginning my thoughts for my bike where to be able to tour Alaska and the Lower 48 along with my wife, and additionally ride any road  I wanted to around my home.
I started utilizing all the information that was available on the   ADV Rider Link   (please click)
After visiting that link, a dozen or so times showed to be that I really wanted to be involved in this type of a lifestyle.

But it didn't take long before I realized that Alaska was more of a destination point then I thought that it was. And if I really wanted to get involved in this lifestyle it was going to take more then a short camping trip to McCarthy Alaska. 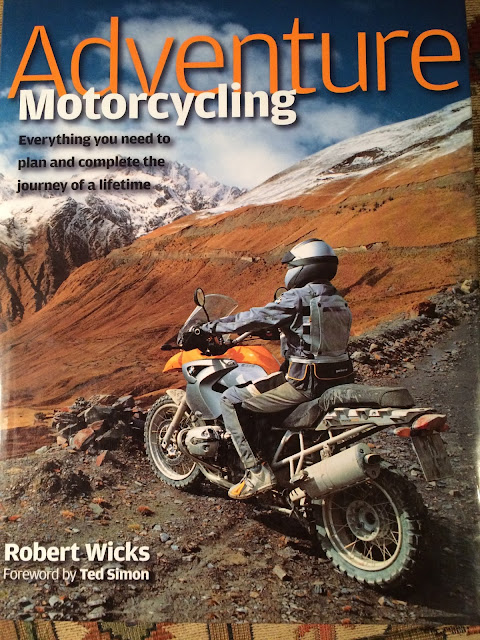 There is a lot of information to consider 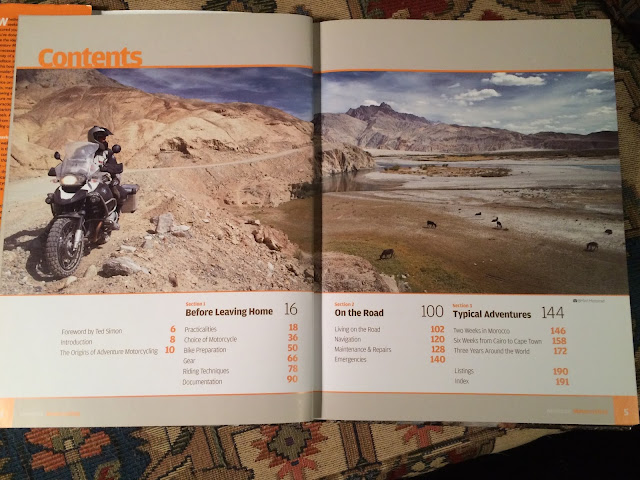 Great tips about getting your bike ready 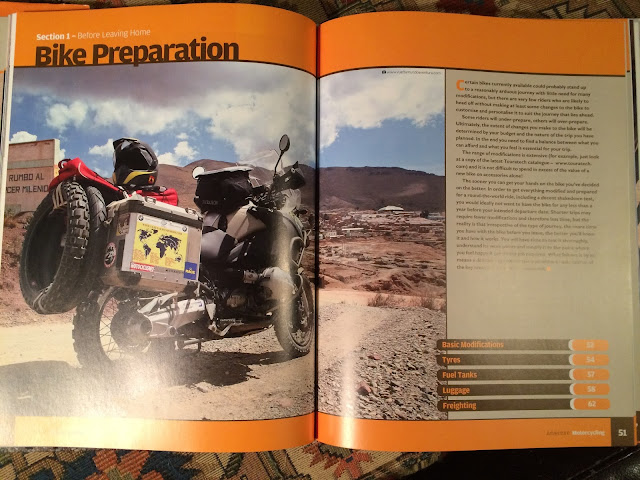 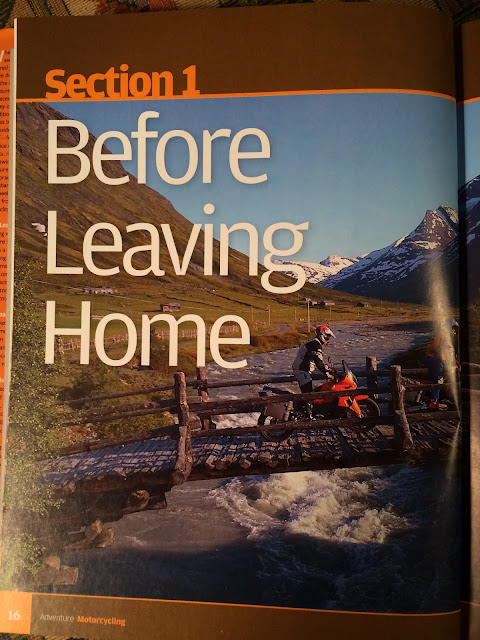 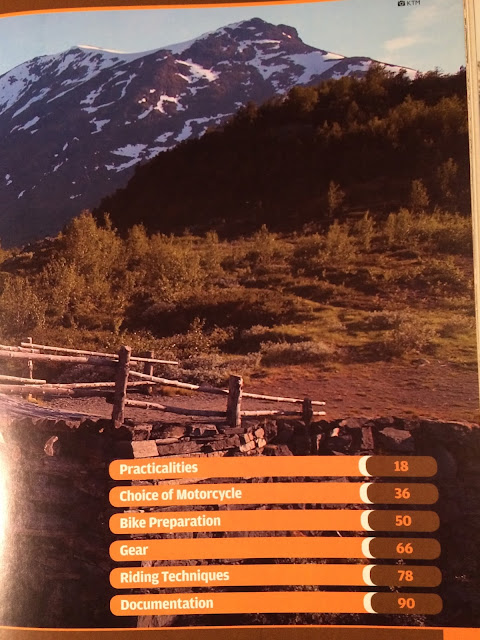 After coming back from my first moto camping trip I was putting some stuff away and Sharon came calling for me carrying my phone and telling me someone from anonymous ? is trying to get with you.

Anonymous is part of the BMW Owners of America in which I'm a member, and every year they publish a book called Anonymous where members will say how they able to help a fellow member on the road it doesn't post your name but only your number and it lists what you're willing to do, my codes are listed c,b,d,kk. C stands for camping or tent space. B stands for sheltered bed roll space, D will travel to help depending on situation and time, and kk stands for coffee and conversation. I think it was the D that got his attention. s he was about 30-40 mi north of Trapper Creek Alaska. Which makes it a little over 100 mi.  He said that he thinks that he broke his leg and that the bike had fallen over on him, apparently someone was there to get the bike off him. I tried to calm him a little on the phone, and asked if he had called  911 yet. he said no. I told him to make the call and to call me back. I then called Robb up and asked if he wanted to do a recovery with me. I'm not sure how it happened but it was decided to use his snowmachine trailer. I drove over to pick up Robb and the trailer and a bunch of ratchet straps that we had between us. Sharon said this is going to be exciting I'm coming with you guys. I still hadn't heard back from Bruce yet, so I gave him a call. He told me he had called the EMT and there were coming from Trapper Creek. I told him I was on the way up there as we spoke. He told me that someone was with him waiting for the EMT's. I was glad to hear that whoever was there to lift the bike off him stayed with him and he wasn't alone. 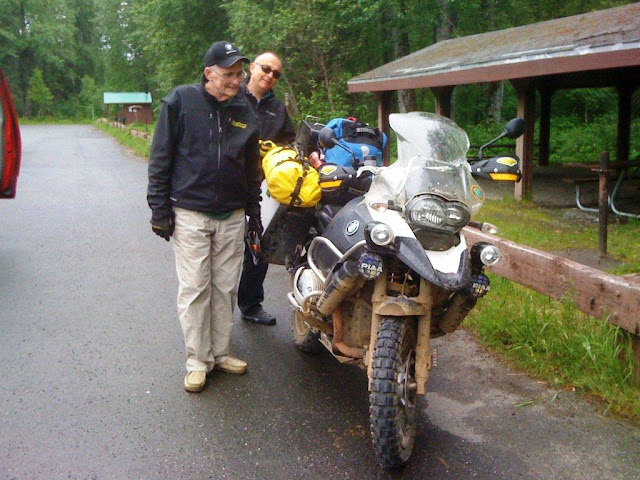 Apparently Bruce  was on his way back from Prudhoe Bay rolled in this rest area and was a little too close to the wooden rail, as he was setting his kickstand he didn't notice the asphalt sort of sloughed off a bit and he lost his balance between the bike and rail. And he felt something go bad in his left leg.

While this was going on, a fellow riding a Harley was parked in the rest area and witnessed the whole event and ran over to lift the bike off Bruce and went ahead and offered his assistance. Bruce in the meantime thanked him and politely and explained he had it under control all this time, He was looking for someone in the anonymous book. There were five numbers in the book and I as the last one.

During the drive to recover the bike, arrangements were made on getting the key to me, phone numbers were exchanged.

We were actually making great time because when we got Talkeetna, we met up with the fellow that had the key and exchanged numbers 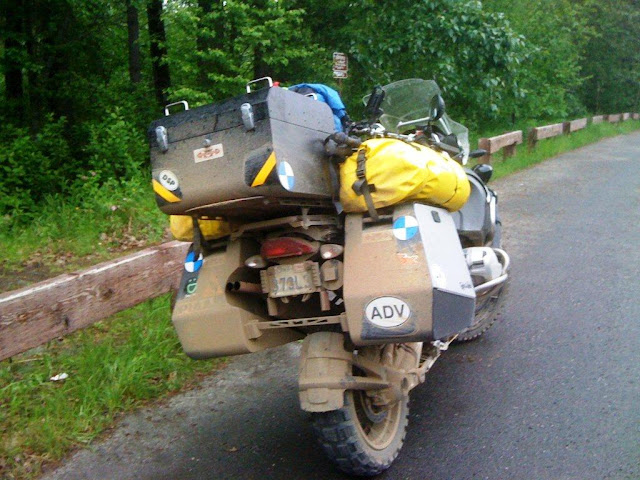 Check out the size of those Panniers 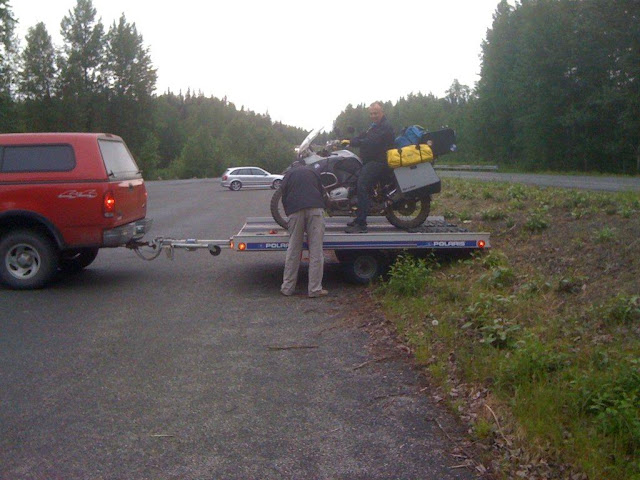 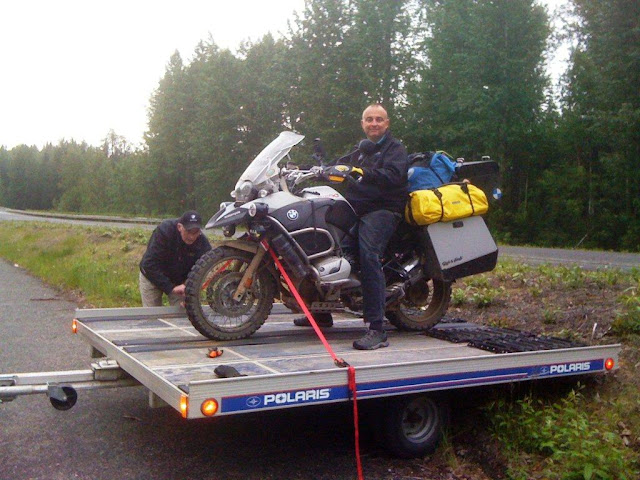 Stabilizing the Bike while I set the Straps up 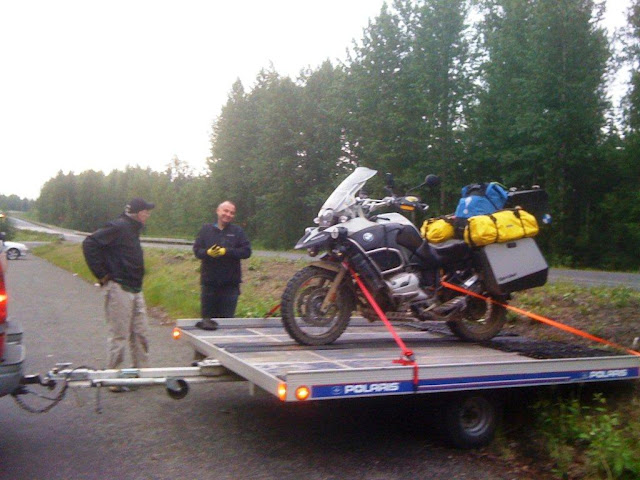 Finished product, not to shabby for our first time. And I'm happy and proud to say the bike didn't move for the 100 miles over a frost heaved road back to Wasilla.

Bruce made it to the hospital and it was discovered that he had damaged the connection point at the Tibia and Fibula on his left leg. Apparently Bruce had damaged it before, the hospital advised him to go home and see his own orthopedic man. They supplied him with a walking cast and he went back home somewhere around Ontario Canada. We kept in touch after he left, I moved the his bike over to the fellow that first assisted him when the bike tipped over. mainly because he had more space to store it, as no one was sure at the time it would have to be stored. Or when Bruce would be coming back.

Bruce left on the 22nd of August and went home, he returned on the 22nd of September, after a fast healing process and got reacquainted with his bike. 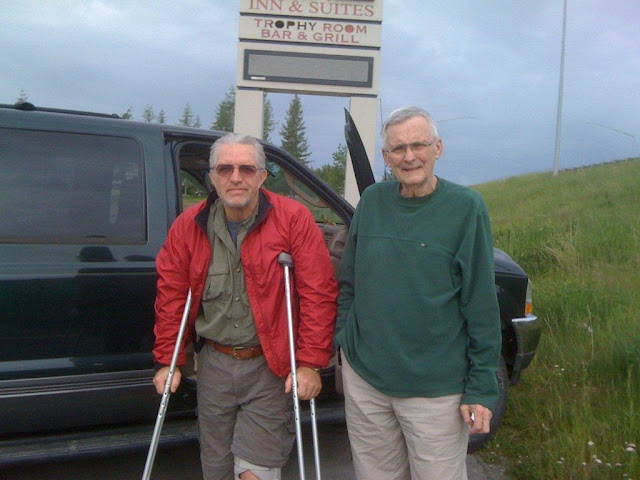 Taking Bruce to the airport 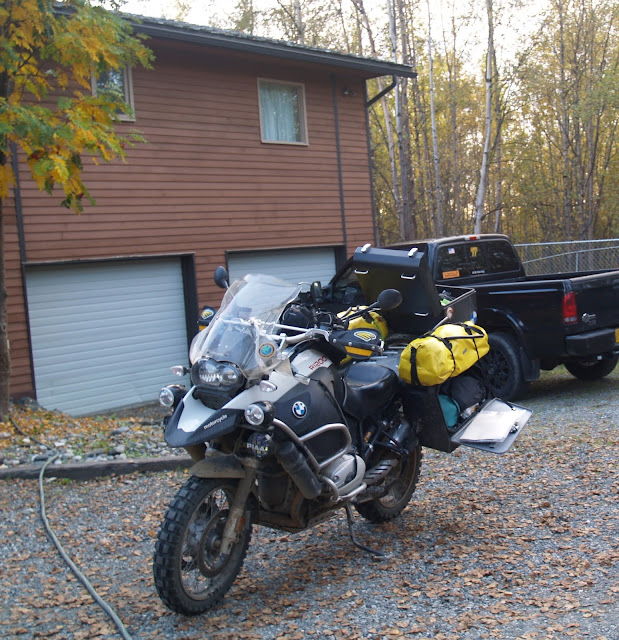 Getting ready to complete his ride 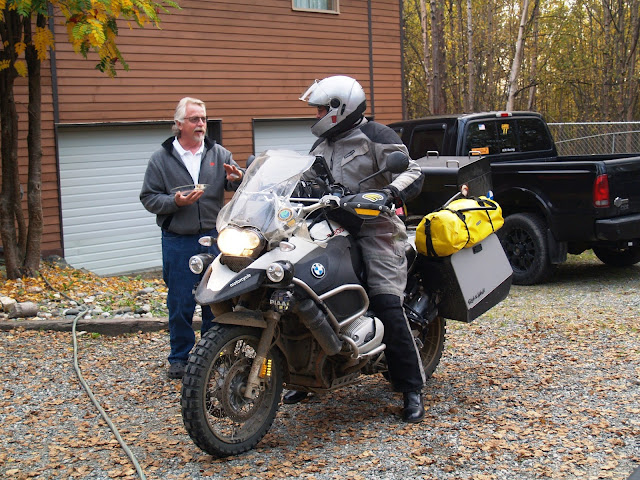 Bruce the very first traveller I ever met

The panniers that Bruce had on his bike,  I absolutely had to have, they seemed to be constructed so much better than the plastic boxes supplied by BMW. Unfortunately since I bought mine the owner of the company quit making them for a while, and was looking for someone to buy his business, glad I bought them in time

Approximately a month went by since Bruce left and Sharon had purchased a couple of china cabinets from a friend of hers and we were going to pick them up. I told her that we should go to McDonalds, because you know what you're going to get and it's fast and inexpensive. As we were finishing our meal Sharon caught my attention and told me to look out the window.

I saw thru the window of McDonald's a helmeted rider , with a GoPro attached to the top of the helmet, we quickly finished our meal and went outside to meet him. He explained he was from Slovenia and was in the middle of a around the world tour. I thought "I just had to talk and spend some time with this guy." We offered him a place to stay for the evening, and explained we had to pick up some stuff and asked if he wouldn't mind waiting for us. He explained that he wanted to use the McDonald's WI-FI and have a shake.

I realized a little later that it is the absolute truth, McDonald's and Starbucks are the best when you're on the road and want to check with family and friends via the internet.

We got back to the McDonald's and Bostjan was still inside checking his mail and the internet. After finishing we told him to follow us back to our house. 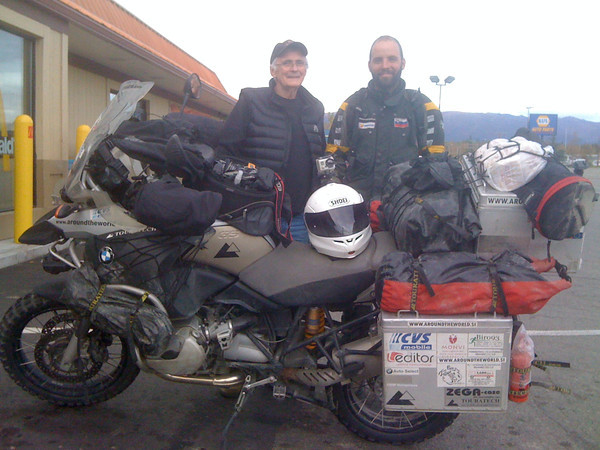 After spending the better part of the evening swapping stories about each other, he explained that he had been on the road since 2008, he showed me his site that showed all of his travels and stories to go along with.

He also asked about some of the more popular rides around where we lived. I explained to him about Hatcher Pass, Denali Highway. He went on to explain that he only had a few days before he had to be out of Alaska because his Visa would be running out. I then suggested that he take a trip to McCarthy Alaska because it would be on his way out of the state. He said it sounded like a good idea and would give it a try.

After a pleasant evening, hot shower great conversation Bostjan was packing up and getting ready to go. I opted to ride as far as Glenallen with him 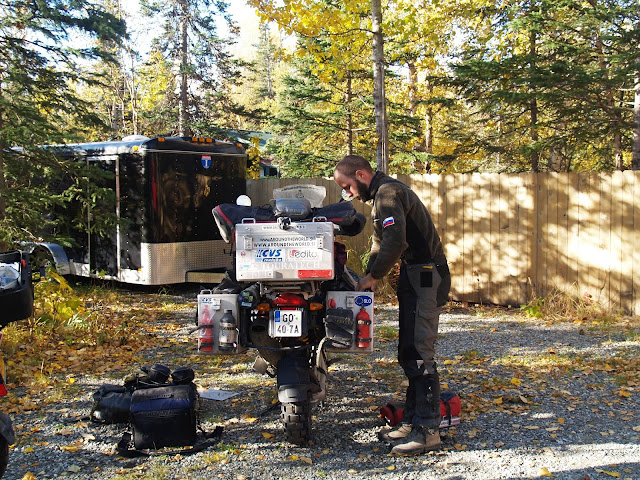 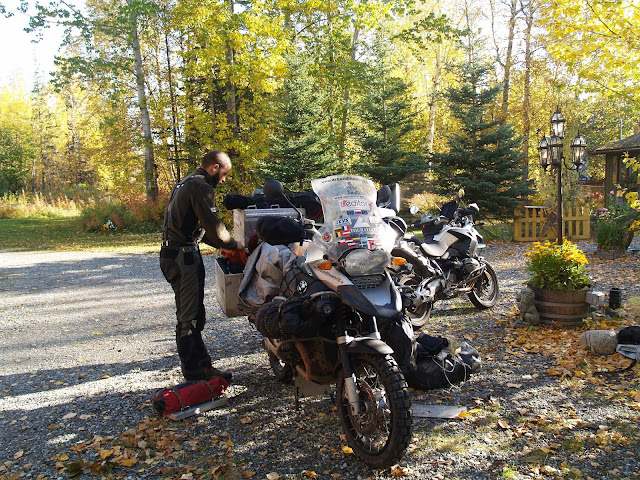 The Glenn Highway is one of the better riding roads in the state. as we were moving up the highway I noticed that Bostjan was no longer around, I pulled over to stop and turn around about a mile back he had pulled over to take pictures of his speedometer and his milage. He had just went over a 100,000KM. 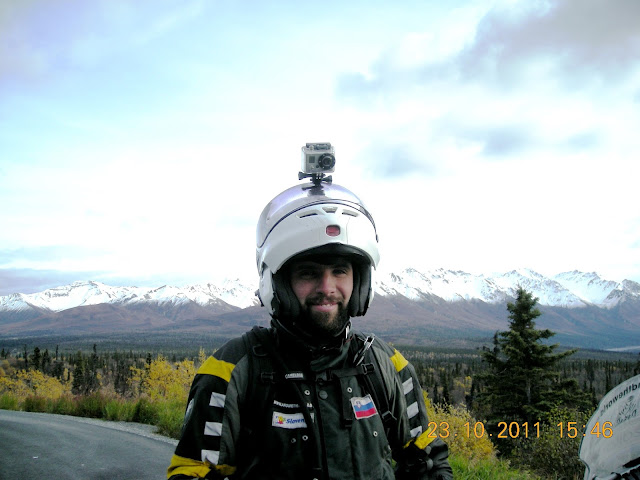 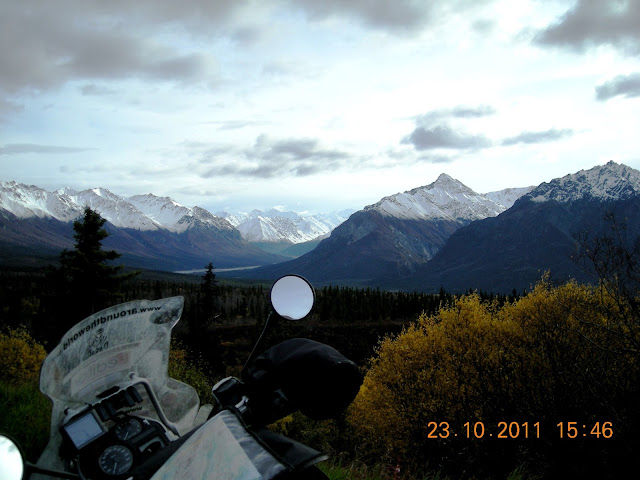 The place where  his speedometer turned 100,000 KM 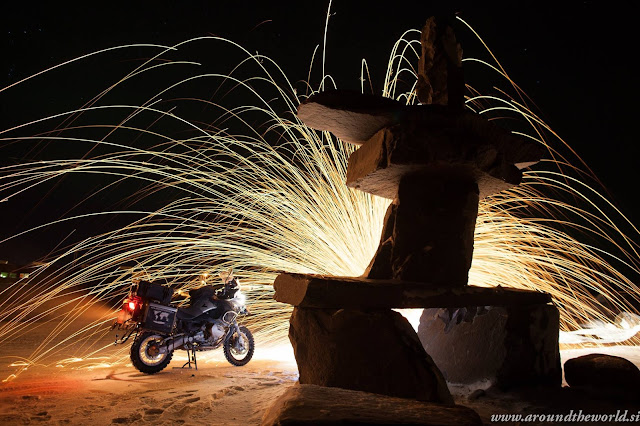 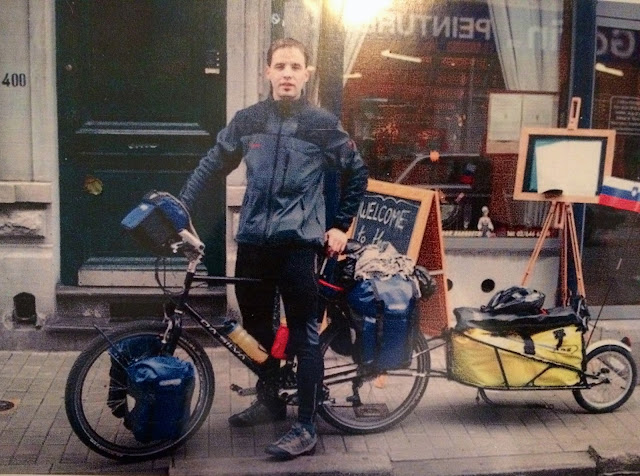 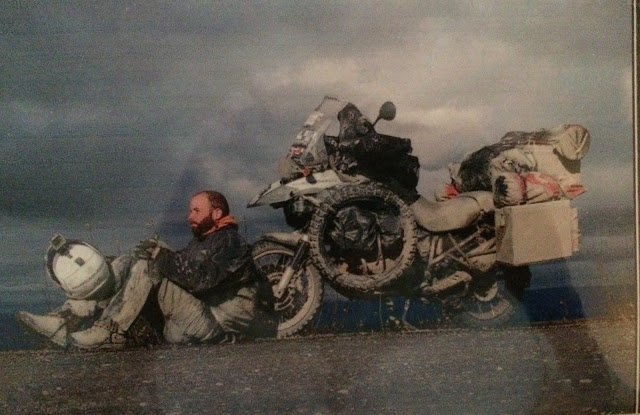 Around the World (link)

Just before meeting up with Bruce and Bostjan, Sharon and I were all set to do our first two-up tour on the bike. I even contacted Hobo to tell him about it, The plan was to go to Haines Alaska, ferry to Skagway Alaska and back home.

Unfortunately we had a ton of rain in August that year, and just won't leave during a torrential rainstorm, I don't mind riding in it, but I just won't start a trip in the rain.

In the meantime Sharon informed me that she didn't really want to ride on the back of a motorcycle!!

She reminded me about the time I bought a snowmachine and she had to have her own.