Best Friends From Kindergarten Thru Today

Hanging out in a Saloon in McCarthy Alaska

I'm going to have to give a little background on this particular posting so I ask the reader to please bare with me. Five years ago in 2013 my wife Sharon received a invitation for her fifty year high school class reunion and the associated contact information of a lot of her old classmates.

I had received the same type of invitation about eight years earlier but from my grammer school instead. Unfortunately because of work commitments for both of us, we weren't able make it there at the time.

Sharon had a great time meeting and catching up with all of her classmates from high school. And I just watched in total amazement at the interaction of everyone together 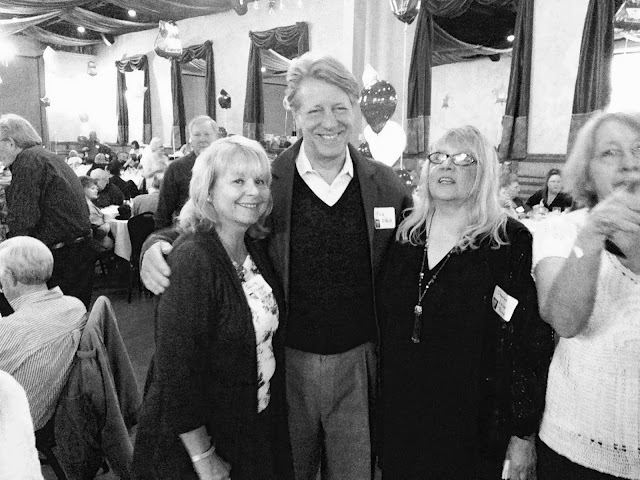 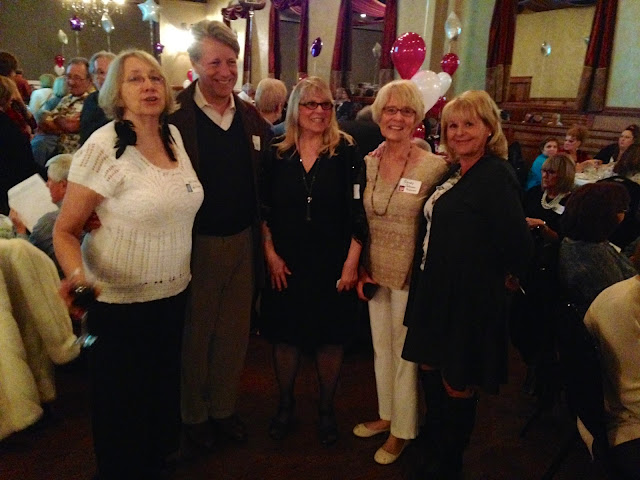 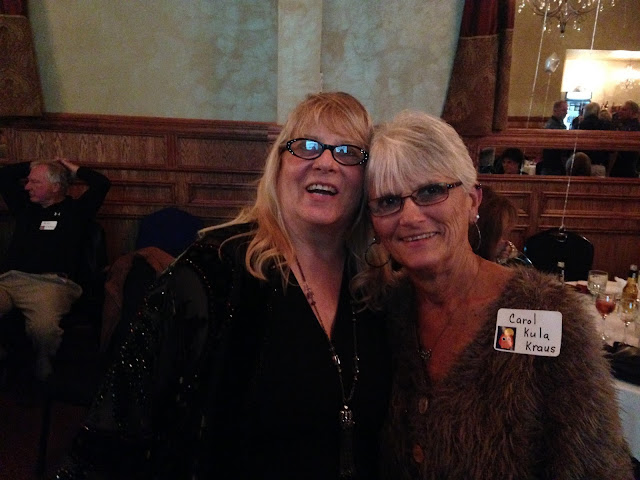 Pictures of Sharon and Friends during their high school days 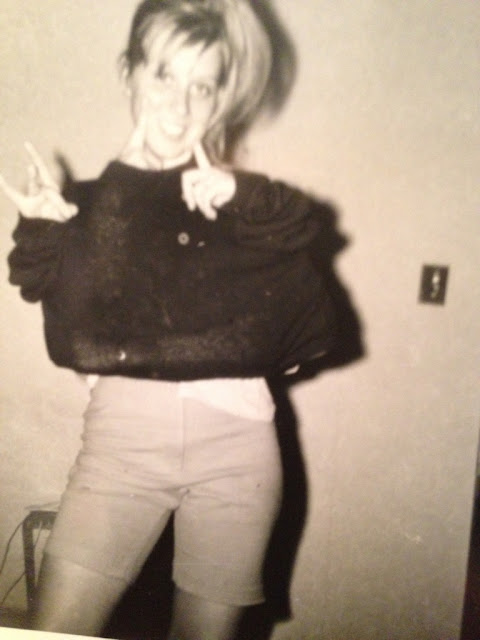 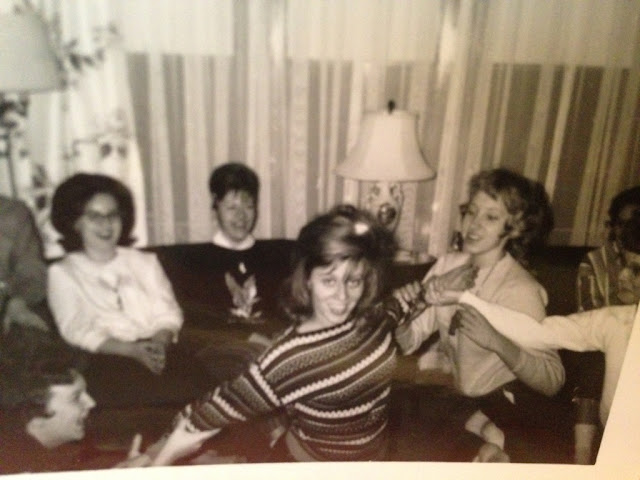 Sharon really enjoyed her reunion, But really felt bad about missing, Betty a girl she had know since  kindergarten. So after numerous searches on the internet and Facebook she located her in Mesa Arizona.

I hadn't really been keeping up with her investigations.

But magically all the memory pictures started appearing around the Peek house, and the most amazing to me were all the pictures Sharon had from grammar school and especially the kindergarten pictures. 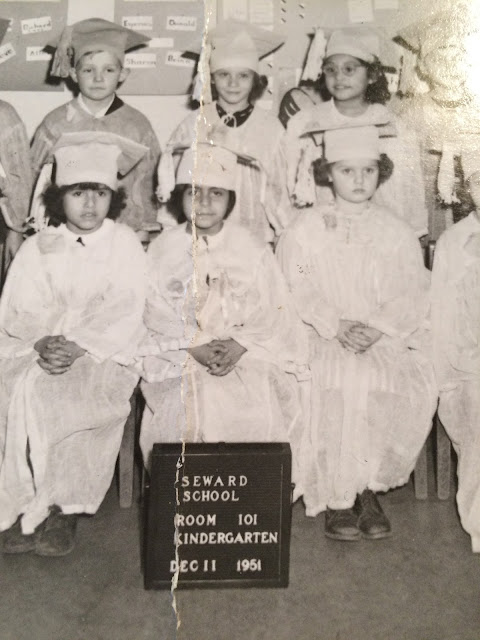 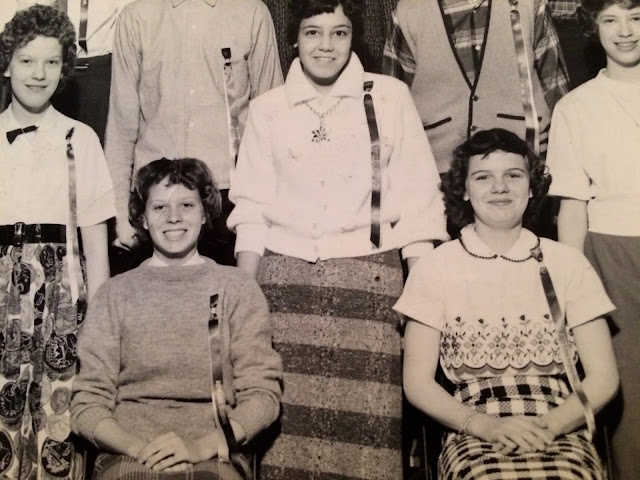 And the next thing you know arrival dates are being verified, and Sharon is starting to make up itineraries for the visit.

Bill and Betty had visited Alaska before by taking a cruise, at the time Betty had no idea that Sharon lived up here. So they had seen a bit of Alaska, but this state is so huge it is impossible to see everything.

Our plan was to show them the  Alaska that we know 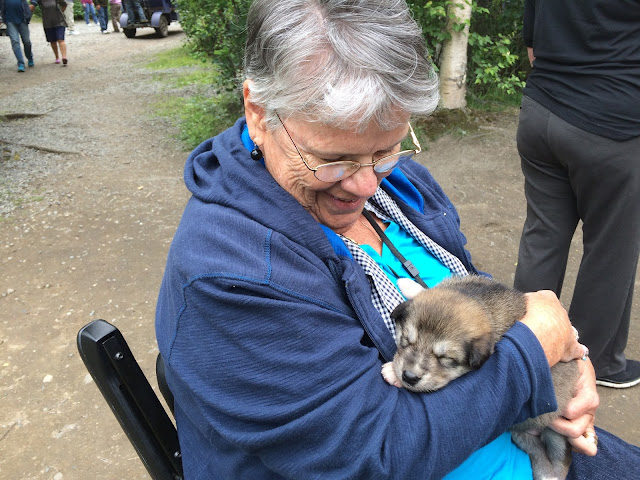 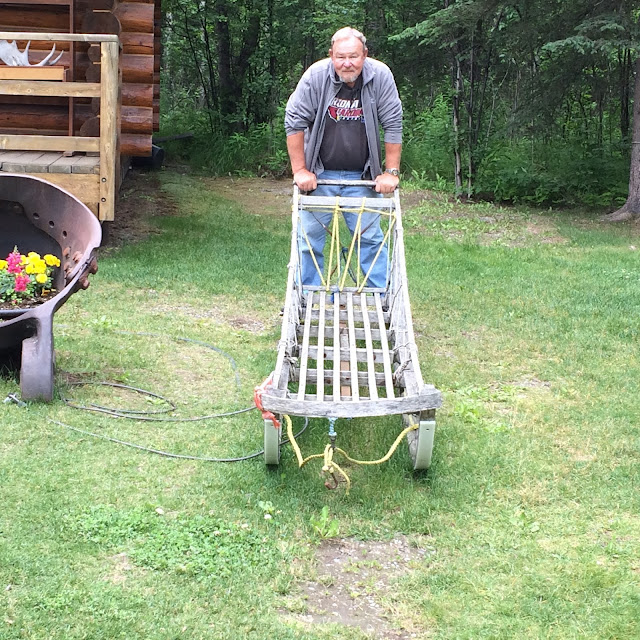 Bill with a freight sled at Iditarod Headquarters 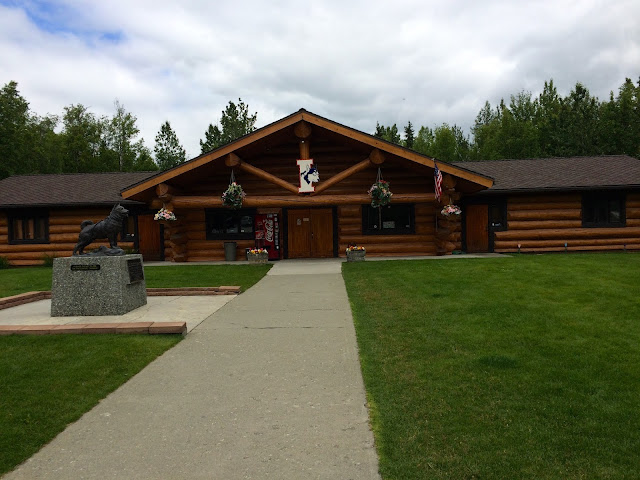 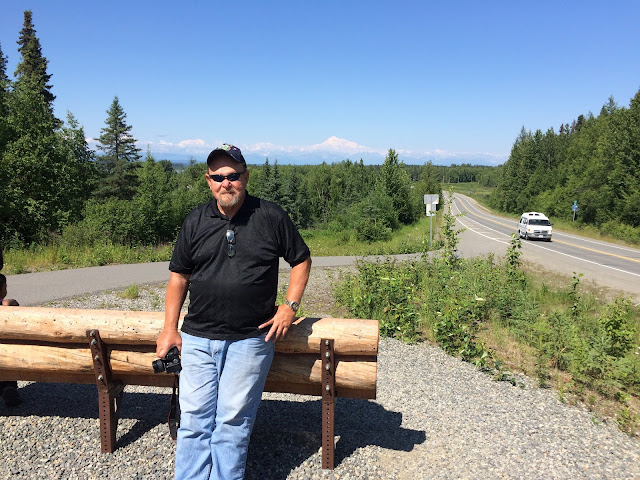 Our next stop was to a friend of ours that we have known the longest in Alaska. She has a stunning home that she has opened up as a bed and breakfast. I've included a link to her below

Our close friends B & B (link)

Next Stop was McCarthy Alaska
Home of the Kennicott Mine

But before I continue, I want to relay a rather humorous incident that happened on the way to McCarthy. Not counting bathroom breaks and stopping for lunch the ride is about 10 hrs long. When we started the day it was a stunning day.

I have a large Ford Excursion so we have plenty of room to ride conformably. At about 300 mi from home I realized I really needed to have a comfort break, I knew of a place on the road that had a real clean outhouse, and decided to stop there. Well I've used outhouses before and was very aware of dropping phones, wallets down the hole. So as I sat down, I put phone and wallet down on each side of the hole. Finishing up I grabbed I thought my stuff  and left the outhouse. Before leaving the store I wanted to purchase something for the use of his facilities. Finding nothing, I gave the owner $5.00, he said it wasn't necessary and I said it was.

Sharon immediately got on the phone in the station to get information on the place we stopped at approx 200 mi. ago. While she was in the station I guess a call came in for a lost wallet. The place we had stopped at was called Grizzly Towing, we called the owner and he explained, that his grandson found the wallet in the outhouse and brought it to him, grandpa gave the five dollars I gave him, to his grandson for his honesty.

I asked the owner is I could pick the wallet up on the way back home and he said no problem. So with that we continued our excursion to McCarthy. Our guests were amazed that we would just leave the wallet and continue on with our trip. In the meantime the weather changed to rain as we pressed forward.


We had reservation for a two bedroom cabin and after getting some needed rest we woke up to some cold, wet weather. Bet we all were dressed warm and had some rain gear and umbrellas.

We knew we could walk across the bridges into the town, and that there is a shuttle that will get us to town and to Kennicott. But Sharon wanted to make sure we could get Betty's mobility scooter on the shuttle.

Sharon checked with Wrangle Mountain Air, who runs the shuttle service, the cost of the shuttle is $10.00 a person so Wrangle put out another van and we more or leased it for the day, and just had to call them when we wanted to move The trip between McCarthy and Kennicott is about 7 miles. 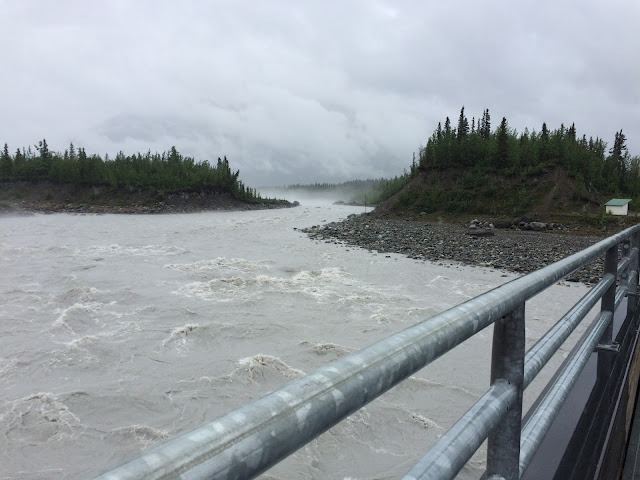 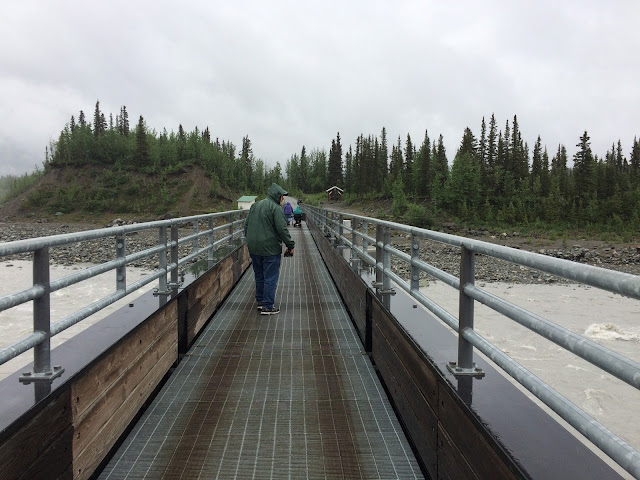 Betty and Sharon waiting for the Shuttle 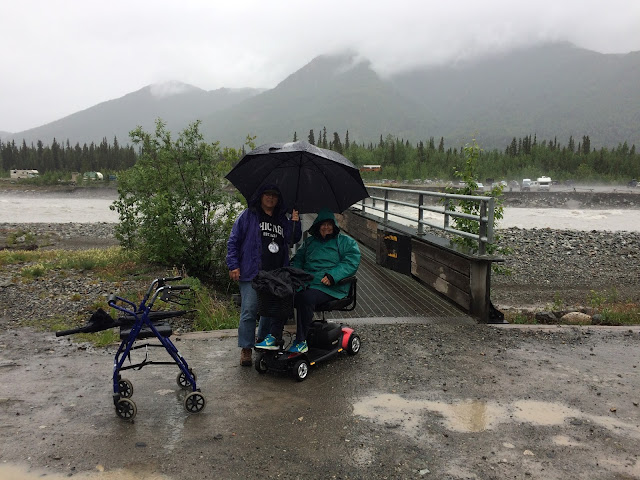 Kennicott and the mill in the distance 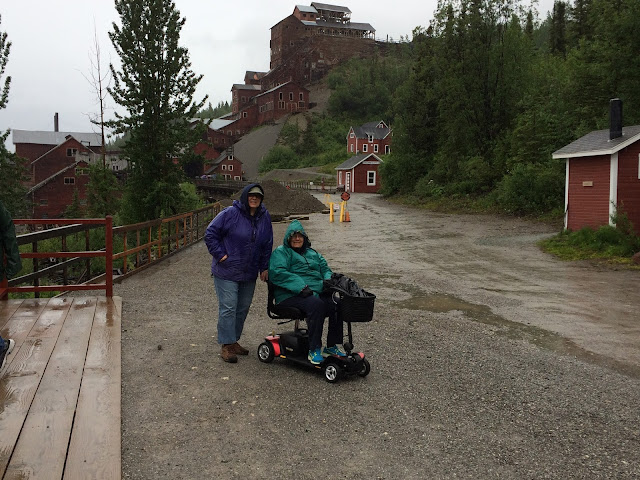 Waiting for the shuttle to go to McCarthy 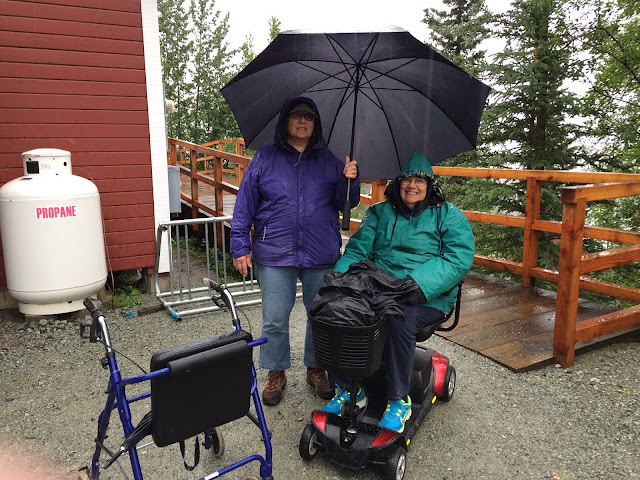 Hanging out in the Goldon Saloon 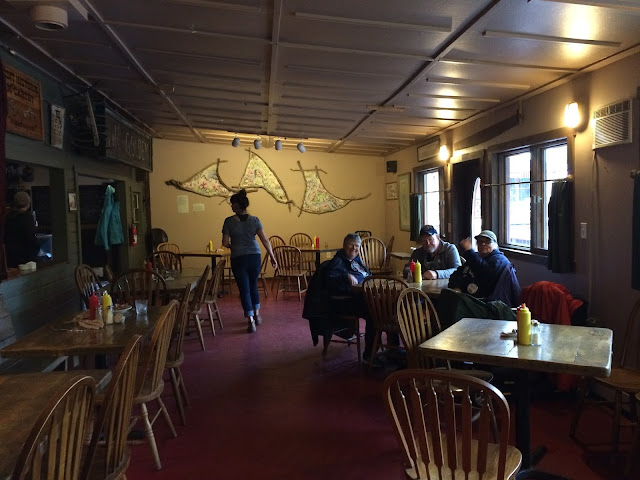 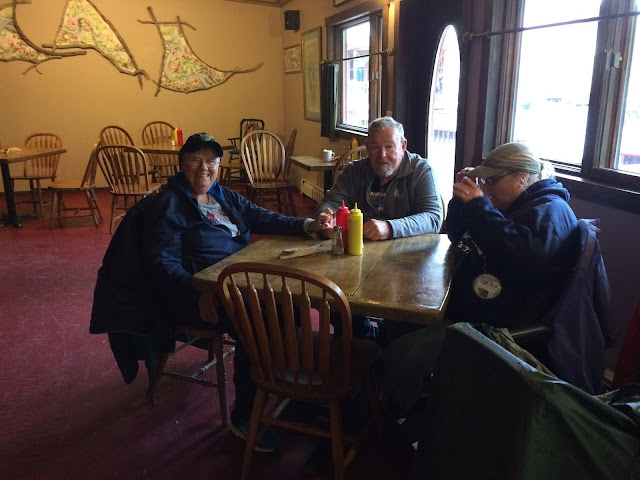 Getting ready to head back to the cabin 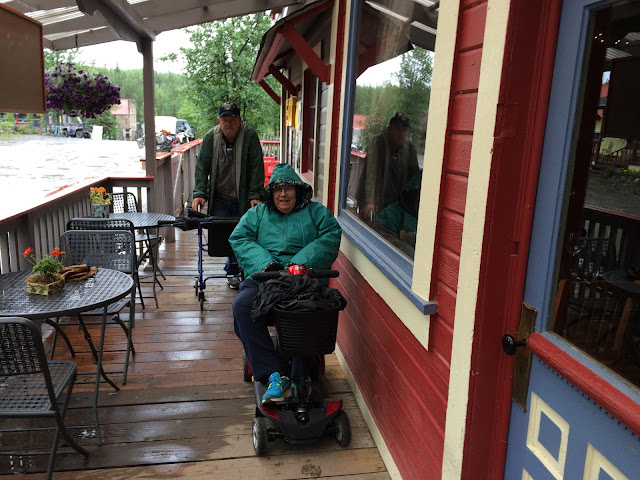