Trying To Get Back In To This

My Contribution for Heart Month

My friends it been a long time since I wrote anything on this blog. Recently a friend of mine  said the he was going to take a hiatus from doing his blog.

And I thought, thats a bummer I'm really going to miss his writing. And then I thought about how long it's been since I've written anything, well I'm going to try to get everyone caught up.

In fall of 2017 we were lucky enough to get a permit to drive the 90+ mile road in Denali National Park. It was a bit of a non-scheduled trip and we ended up camping on our truck the first night and then we were able to get an actual room for the evening that we finished the trip.

We had absolutely no idea that the whole area completely closes down directly after they have the permit drive. It was really eerie driving around, all the facilities the next day. It was like driving in a ghost town. The last place we stopped at was on top of cliff overlooking the whole valley. We drove up to the hotel and again it was completely deserted. But Sharon took this video explaining the whole area. It was this clip that really started me worrying and thinking about Sharon's health

I noticed how out of breath she was, just being out and walking around. We had a doctors appointment  after the first of the year, and decided to add this question to the doctor. The doctor saw what I was talking about and put in a request with the Heart Institute for a test or something to see what the problem might be. Another doctors appointment and we told the doctor that no one contacted us about her possible problem. I had my yearly Cardiologist appointment and Sharon tagged along with me to see him.

I explained to him that she tried to see him and someone just dropped the ball, I explained the problem and after talking with Sharon he set her up with a stress test. That is where they insert a dye or something into you when your heart is under stress from a workout. The next day we went back to get and they inserted the same thing when her heart was at rest. Three-four days later we have another meeting with the Cardiologist, Sharon and him have a great talk, and he explains that women present differently about heart problems, and that he feels that something is wrong, but the only way to prove it  was to insert a catheter in her arm that will have a camera and we could go in see what was wrong, if anything. None of the tests that were performed indicated that there was a problem.

We really just put our faith in the doctor and said let's go for it
He set the procedure up for a couple days later.

After we got home my mind just reeling with what had been happening. Does Sharon have a heart problem? Did we just go carte blanche on doing an exploratory cardiac catheterization  ? If they find something can they fix it. I hope so.

So on July 5th 2018 we go to the hospital meet our destinies, I not to sure on the time but it was early morning 9-10 they put us in a small prep room so Sharon could get into the hospital gear, something started to happen in the lab, we were told that we were put on hold for a bit because an emergency came up. About 45 mins.later they came and got Sharon, we kissed and I told her I'd be waiting for her. It wasn't all that long before a nurse came out and told me to follow her. i was really nervous going in there

Upon entering the room I see about six people in surgical scrubs standing around an operating table that has my laying on it and fully awake ! I rushed over to her and noticed the surgical team kind of had her right arm protected from unnecessary movement. And she had a great smile on her face. I wanted to just hold her in my arms but at the time all I was allowed was kiss.

The doctor allowing this interaction between us stepped in and with a lot of exuberance, said Mr.Peek we found it! And please step over here so I can show this to you, I turned to see what he was talking about and saw the largest flat screen I had ever seen in my life. It had to have been 60" square. And it showed Sharons complete vital signs in the upper left hand corner and the right side had a space for videos to be shown. At first I had no idea as to what I was seeing, but the Doctor explained that it was his tool moving in the right coronary artery, he showed the stent being inserted, he then had to install a ballon that literal broke up the blockage and the whole vein suddenly appeared as open. The doctor went on to explained that Sharon had a 95% blockage  of the right coronary artery, and since the blood supplies the oxygen to all the parts of our bodies, basically her heart was extremely close to failing 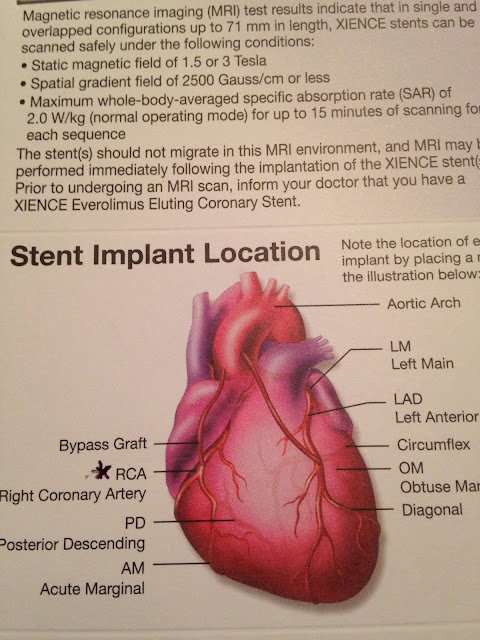 Sharon had absolutely no pictures indicating she even had a blockage

My girl an hour afterwards in ICU 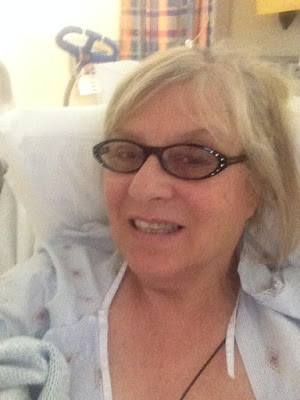